If you’re looking for cookie-cutter landscaping, Bay Maples: wild California Gardens is certainly not for you. Rather than take the standard approach to gardens as many traditional landscapers do, Alan, the founder of Bay Maples, thinks of his projects as artwork – and never revisited the same look twice. With expertise in alternative watering systems like greywater and rainwater collection, as well as a working knowledge of native plants and reusable materials, Hackler offers his clients imaginative renderings that will make them no talk of the neighborhood. 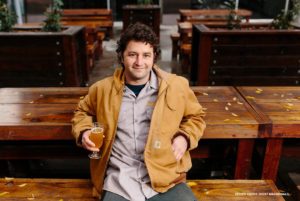 Hackler started with another landscaping company, but after his suggestions for utilizing sustainable resources were dismissed, he decided to prove their practicality by going into business for himself. “I started from nothing,” Hacker says. “When I began, I didn’t have a truck. I only had a few tools. I did a lot of my first gardens on a bike.” Hackler’s first big break came in 2009 when California change the law to simplify the permitting process for gray water irrigation (Systems that collect water from the washing machines, showers and bathroom sinks). Hackler signed up for one of the first installation trainings, and because not many people were certified yet, he became “the de facto local graywater expert. ”

Perhaps Hackler’s greatest talent is his ability to take unwanted, time-worn objects and give them new life. Glass shower doors in Hackler’s hands became greenhouse walls. Cables once employed as rigging in a now-closed theater are assimilated into an arbor for weaving vines to climb. A claw-foot bathtub discovered in a client’s backyard is converted into a patio sofa. The weathered wood of an old door whispers of it’s colorful past life – and makes for a bar counter with much more character than virgin planks street from the sawmill. Those nicks and grooves don’t make it flawed, but instead offer backstory. 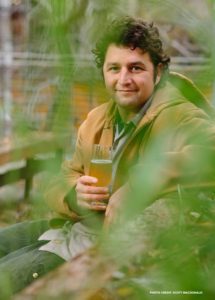 Hackler thrills in the chase of the material. He sifts through discarded scraps piled by the side of construction sites and intercepts fencing company truck loaded with torn down pickets on the way to the landfill. Hackler fondly recollects the time he went hunting for cardboard – his biodegradable alternative to the plastic sheeting typically used as a weed barrier – and uncovered the mother-load in a garage door installers dumpster filled to the brim with 8 foot panels of the material. Hackler asked the company if they would consider stacking the pedals beside the dumpster in exchange for a 12-pack of beer. “The next time I go there, it was piled up perfectly!” Hackler says. “They put it on a nice pallet and bundled it up with some wire so it would stay nice and compact.” They even brought out the forklift to help him load it onto his truck.

In any discussion of landscape design, it would be remiss not to mention crowning glory of any yard – the plants themselves. Hackler specializes in need of an edible vegetation, which come with added benefits. Plants habituated to the California climate flourish with about one-tenth of the water non-native plants need. They have also developed defenses to ward off regional pests, eliminating the need for harmful pesticides. “Instead of forcing something, let’s design around ecosystems, ” Hackler proposes.

If these reasons aren’t enough to convince homeowners to make the switch, they should consider that native plants have established symbolic relationships with local wildlife and pollinators. Plant a manzanita bush, and it’s goblet shaped flowers will be the perfect draw for the proboscis of a monarch butterfly or the long, thin bill of an Anne’s hummingbird. Plant and oak tree, and the titmice – considered” the voice info of the oaks quote by one naturalist – will thrill from its branches and dine on its acorns. 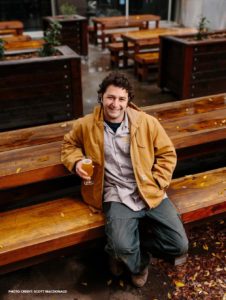 Local fauna aren’t the only ones to have a relationship with the specific kinds of plants. Many of Hackler’s clients excitedly tell him that the tame dwellers in the gardens resemble wild cousins scrolling along side favorite hiking trails and camping spots. “They are connecting these different experiences they have in their life, “Hackler says. “It has intrinsic value.” So while a redwood excursion isn’t always possible for the typical suburban family on a given weekend, The garden just outside their home provides a small window into the natural world.

“My garden is my most beautiful masterpiece”
– Claude Monet