A Design that Goes With The Flow:
a Home + Garden Design feature.

An updated bathroom offer sustainability in more ways that one – and a beautiful tranquil new space. 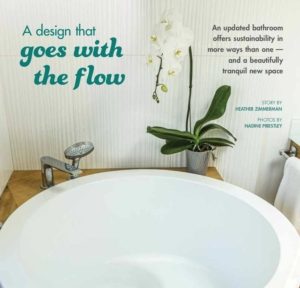 The sleek, clean lines of Ken Krechmer and Elaine Baskin’s renovated master bath belie the fact that the addition of something quite utilitarian inspired the update. Though, as the couple happily attests, the room has truly transformed into a calming oasis, there’s much more than it appears going on beneath those pristine surfaces.

They worked with Palo Altobased architect Tali Hardonag to remodel the master bathroom on the second floor of their home in Palo Alto’s Duveneck-St. Francis neighborhood. It’s an update where important functional details are tucked away in easily accessible spots — and some hide in plain sight.

“One of the amazing things to me about the bathroom is that it (seems) much larger. and we’ve had guests who knew us before come in and ask ‘did you enlarge it?’ and it’s exactly the same size bathroom,” Krechmer said.
A feature wall, painted a vibrant blue and not visible until you enter the room, offers a fun pop of color — the room’s first little surprise.

But the clue to the bathroom’s new utility lies in a toggle switch concealed in the vanity beneath one of the room’s two sinks. The switch controls a valve on the new grey water system, which diverts water draining from the shower, bath and sinks away from the sewer and into pipes that lead to the backyard, where it irrigates a small area of plants.

The desire to add a grey water system, coupled with the need to replace aging fixtures, spurred the remodel. (At the same time as the bath remodel, the couple also added a separate grey water system for their laundry room, which waters an area in the front yard.)

“The sinks upstairs had started rusting around the drains. They were flush-mount sinks and I loved them. We had them coated, but they kept rusting so then we said, ‘we need to do something about this — and we can put in our grey water system,’” Baskin said.

Krechmer and Baskin haven’t had to adapt much to accommodate the grey water system. They use natural soaps and shampoos, which don’t harm the plants, but in the rare instance when they know something caustic, like certain cleaners, will be going down the drain, they flip the switch and the valve changes the drains’ destination from the grey water system to the sewer. They don’t use the switch much, except by way of demonstration, they said.

To ensure the valve has opened properly, after Krechmer flips the switch, he opens a cabinet and pulls out a false bottom shelf, revealing a hole cut in the bathroom floor that provides access to the system’s valve. When the home’s previous owner added a second story, enough space was left between the joists to easily fit the valve (although a small soffit was built into the ceiling of the room below to accommodate the greywater pipes). 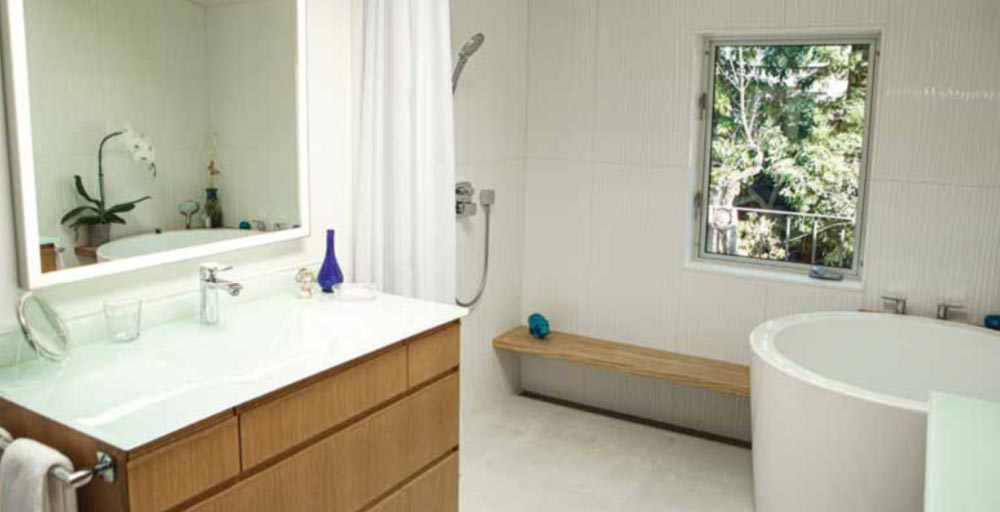 The joists at the opposite end of the room, along the back wall, needed a bit of shoring up when it came to installing the bathroom’s new soaking tub. “That’s a lot of weight, with the water in (the tub) centered in one particular area rather than spread out over the length of the tub,” Hardonag said.

The original bathroom had a tub-and-shower combo, but when the couple decided to replace it with a curbless shower, Baskin said she wasn’t willing to give up a bathtub entirely. So they decided upon a graceful round soaking tub, which serves as a visual anchor for the room’s “wet area” that also contains the curbless shower. They had to search for the right tub and finally found it online. When it arrived, Baskin “test drove” the tub to ensure it would be a comfortable fit.

“We ordered it with the understanding that if we didn’t like it, we can return it as long as it hasn’t been installed. We ordered it early and it lived in our garage,” Baskin recalled. “Then I went and sat in it. We unpacked it just enough that I could get in it to see if it would really work, and it did.”

“The advantage was that it could be incorporated into the design, we knew it would be in the design and we wouldn’t have to scramble to find something else,” Hardonag said of procuring the tub early on.

The tub has no built-in overflow, and that’s where another of the room’s hidden secrets comes into play. The curbless shower has no step up, or curb, to contain the water, so Hardonag added a long drain along the back wall of the shower, under wooden bench seating, and sloped the floor inside the wet area downward to the drain. The angle is so subtle as to be barely noticeable to the eye; in fact, only if you stoop to look, can you see the floor gently sloping away from the edge of the soaking tub. When water splashes out of the tub, it simply spills into the wet area and drains along the back wall.

A sturdy track built into the ceiling, like those used for hospital curtains, allows the custommade shower curtain to be pulled smoothly from wall to wall and enclose the entire wet area. The curtain doubles as a privacy measure to shield the rest of the room from the view of a window that opens onto the second-floor balcony.

The shower bench and tub surround are made of Accoya, wood that’s treated to withstand wet conditions.

“Ecologically speaking, this is basically a very cheap wood that is processed chemically and temperature-wise to produce this moisture resilience very successfully. The grain marks are about an inch apart (showing that) the tree grew an inch in a year, so it’s quite replaceable,” said Krechmer, who noted that he researched Accoya extensively after learning about it from Hardonag.

Next to the wet area, the room’s two custom all-glass sinks, mounted atop generoussized cabinets, face each other on opposite walls. Like the tub, the flush-mount sinks also have no overflow, but are installed at a subtle angle that allows any spillage to head toward the adjoining wet area. Baskin said she only occasionally notices it when something like a tube of makeup placed atop the vanity slowly rolls toward the back wall. The couple chose flush-mount sinks (in which the basin is seamlessly integrated into the surrounding countertop) because of the ease with which they contain spills.

Krechmer and Baskin spotted glass sinks at a local bath store, but the attached cabinets didn’t appeal, so they located a manufacturer online and custom ordered sinks. The custom cabinets offer plenty of storage space while the delicately beveled edges of the drawers and cabinet doors are a touch that adds to the room’s understated luxury.

Even so, a pragmatic concern underlies the renovation, and offers another level of sustainability. The couple chose a curbless shower because it’s a safer option for when they get older. Baskin said that they also purchased a grab bar for added safety in the shower, but didn’t have the heart to mar the tile … just yet. “We put in the tile and we looked at it and said ‘we cannot put a grab bar there until we really need it,’” she said.

They did plan ahead and installed grab-bar mounts beneath the tiles for later on. “One of the things in terms of sustainability is when that grab bar needs to go in, there doesn’t need to be a remodel pulling off the tile, opening up the wall, putting in the backing and patching it up,” Hardonag said.

Krechmer, an engineer, and Baskin, who founded a nonprofit, describe meticulous planning in the remodeling process, but also point to some unexpected delights that surprised even them, for which they credit Hardonag’s skillful design.

“The lights around the mirror create a reflection from the glass around the sink. It’s really beautiful and I had no clue that that was going to happen at all,” Krechmer said. “But I’m absolutely certain that if you do good engineering, when you get done it’s way better than you thought it was going to be.” 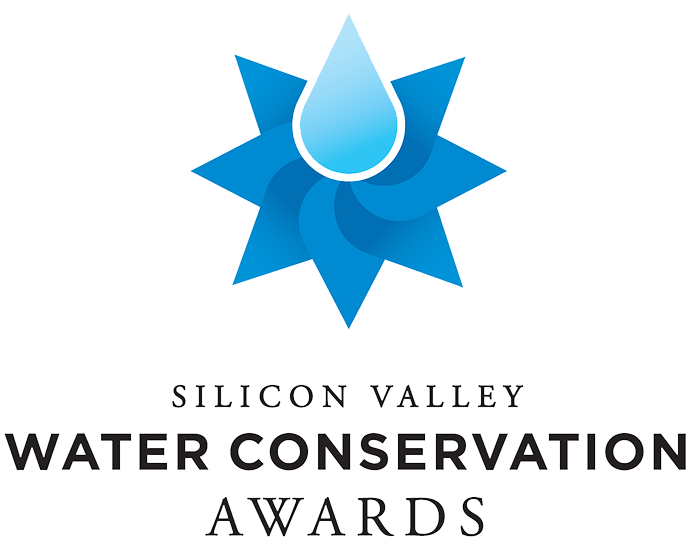 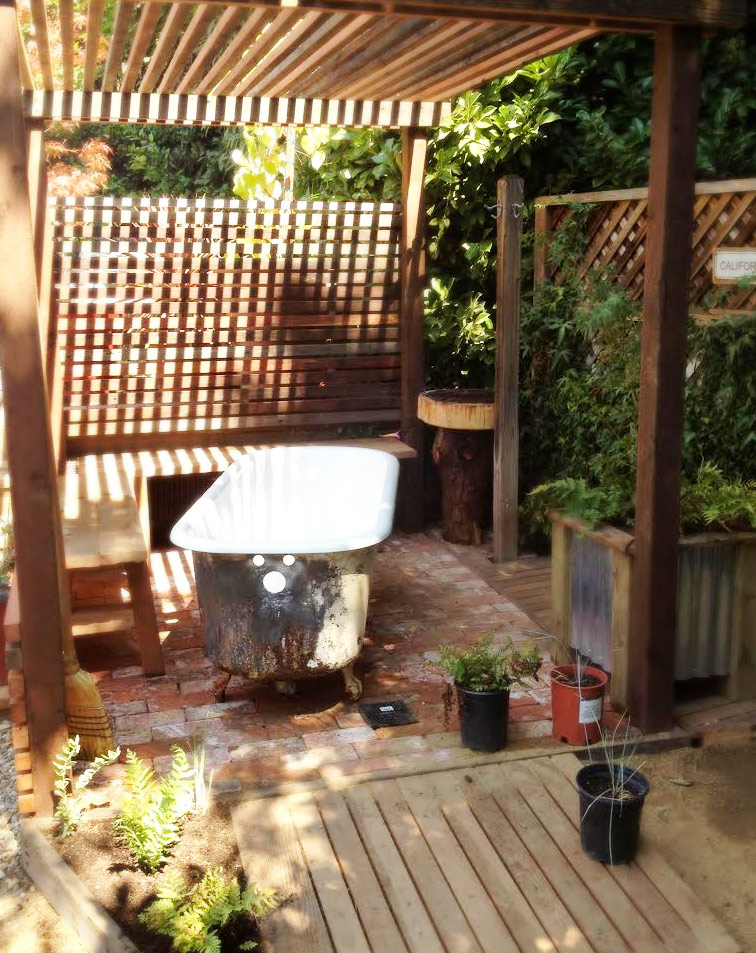